The Cannock site provides a depot facility whereby containers are currently brought in by road from the ports of Felixstowe, Southampton and London Gateway as well as by a combination of rail and road via Midlands rail terminals. From the Cannock depot, containers are then transported onwards to Midlands-based distributions centres.

The proposed rail head facility will allow for an expansion in this operation by increasing the number of containers being brought in from ports, meaning that some HGV road trips are no longer needed to serve the Cannock depot.

The Challenge of the Cannock Site

This increase in capacity at the Cannock site will facilitate an uplift in the onwards transportation of containers to local Midlands distribution centres. In turn, this will result in an increase in short distance HGV trips on the local road network.

The challenge for Mayer Brown was to demonstrate how the operation of the proposed scheme would translate to a change in HGV activity on the Strategic Road Network (SRN) and in particular at the nearby Churchbridge Interchange, which Highways England have identified as a junction that is sensitive to changes in traffic levels.

How a Successful Outcome was Achieved

In the first instance the assessment required an understanding of existing operations and how this would change with the rail head in place, requiring close consultation with the client.  To explain this ‘before’ and ‘after’ logistics flow diagrams were included in the Transport Statement that supported the planning application (see opposite).

From this it was established that although there would be an increase in container carrying HGV traffic to local distribution centres, the introduction of a rail head at Cannock would mean that containers would no longer have to be brought in by HGV from other Midlands rail terminals.

The distribution of additional HGV movements between the Cannock depot and local distribution centres was based on Pentalver delivery schedule data and Mayer Brown used GIS mapping to plot distribution centre locations and delivery frequencies. Using this information, a traffic assignment profile of the net change in HGV activity was established upon which Highways England were able to determine that the SRN could accommodate the development scheme.

In addition to a Transport Statement to support the planning application, Mayer Brown also prepared a Travel Plan and a Construction Vehicle Management Plan. The development was granted planning permission in March 2020. 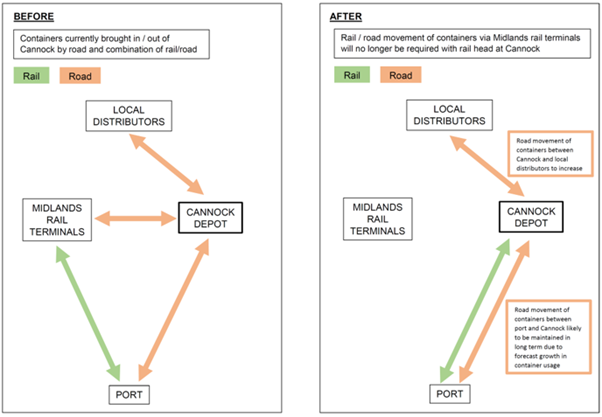 The site consists of a large area of land immediately to the west of the A6 in Garstang, Lancashire. An abandoned and long gone railway line ran west to east through the centre of this area of land.

Mayer Brown has been working for South Down Real Estates, a winery company who produce the award-winning Nyetimber English sparkling wines.

Survey for Hydrological Study of The River Yar - IOW

Hydrological study to help inform a solution to flood management in an area of outstanding natural beauty and scientific interest.

Mayer Brown provided the Environmental Impact Assessment required to support a successful planning application for the remediation and redevelopment of a site at Westfield tip, otherwise known as the…

Dashwood is a 38 hectare woodland in south Hampshire, designated as a Site of Interest for Nature Conservation (SINC) due to its Ancient Woodland habitat.  The woodland has been managed for many…

Mayer Brown are currently undertaking the Travel Plan Coordinator role for Redrow on their site in Wilton near Salisbury. We were initially involved in the transport planning for the planning…

The Marine Works, Isle of Wight

The Marine Works site is a 0.21 hectare parcel of land located on Embankment Road off Bembridge Harbour on the Isle of Wight. At the time Mayer Brown was engaged, it was vacant land which had…

Mayer Brown were appointed by Dudley Taylor Pharmacies Ltd to provide transport planning consultancy services in relation to a planning application for a new medical practice. The proposed site for…

Since early 2018 Mayer Brown has worked upon a greenfield site for development for CALA Homes at Milford in Surrey within Waverley District Council authority area.

Mayer Brown assisted in securing planning consent, planning condition discharge and granting of a bespoke permit from the Environment Agency to ensure key road safety improvements for a local yacht…

Mayer Brown provided highways and transport advice in relation to the development of a 12Mw Solar Photovoltaic Farm at Hawker’s Farm in Theale, Somerset.

Located in north west Cardiff, the new garden city Plasdwr will be set within around 900 acres (368 ha) of open countryside bordering the existing communities of Fairwater, St Fagans, Danescourt and…

SoHostel is an exciting backbacker hostel on Dean Street in Soho. The property is owned and managed by One Housing, a large not-for-profit organisation that houses and cares for thousands of people…

Having overseen the redevelopment of a brownfield site to accommodate housing and transformed the existing site with modern offices and factory/museum, Mayer Brown is now working with the client to…

Erskine Barracks in Wilton, Salisbury had for many years been the headquarters of the UK Land Forces. In 2010, the headquarters moved to Andover and for five years the 34 acre site laid derelict.

Mayer Brown has been working for Countryside Zest (Beaulieu Park) LLP in relation to their project at Beaulieu Park, Chelmsford, Essex.

Mayer Brown was appointed by Solum Regeneration, a joint venture between Network Rail and Kier Property, to act as Transport Advisors.

Mayer Brown was appointed by Solum Regeneration, a joint venture between Network Rail and Kier Property, to act as Transport Advisors.

Mayer Brown was appointed by Countryside Zest a joint venture between Countryside Properties and London & Quadrant  to advise in relation to the planned new railway station.

Mayer Brown was appointed by Solum, a joint venture between Network Rail and Kier Property to act as Transport Advisors.

The development site presently accommodates a mixed use B2/B8 unit and a D1 Nursery.

The existing site consisted of 9 industrial units that was located at the end of a cul de sac within the London Borough of Merton.

Mayer Brown is working with Grainger plc at West of Waterlooville MDA in Hampshire to provide 2550 new homes. A tributary of the River Wallington runs through the site, which flows south west into…

Mayer Brown is working with Grainger plc at West of Waterlooville Major Development Area (MDA) in Hampshire to develop a site to provide 2550 new homes, infrastructure, a new school, community…

Mayer Brown has been working for Wight Farm Energy LLP, a partnership of six family-run farm businesses. This group was set up to facilitate the construction of an anaerobic digestion plant on a…

Mayer Brown was appointed by Transport for London to undertake Road Safety Audits on the LCN+ schemes, covering a total of 16 London Boroughs over the south-east , south-west and north-west sector.

The heavy flooding around Britain over the last couple of years make the question of how to provide the 28,000 new house per annum required by the South East plan, without exacerbating existing flood…

Mayer Brown was appointed by Sainsbury’s Supermarkets Ltd to design and deliver an improvement to Crown Square Roundabout, the focal point of Matlock Town Centre.

The Property Services Section of the Isle of Wight Council was seeking to dispose of this former school site which was surplus to requirements.

B1 Office to C3 Residential Use Prior Approval Determination

This London site next to Battersea Reach comprises existing uses of a petrol filling station (PFS) and ancillary convenience store.

This brownfield site on the eastern bank of the Medina Estuary is owned by Feria Investments Ltd., who appointed Mayer Brown as part of the team tasked with gaining planning approval for its…

Bowling for better land use

Ageas Bowl is known as the home of Hampshire cricket and one of the greatest English test cricket locations, but like any thriving 21st century sports ground, the action doesn’t stop at the end of…

As part of our involvement working with Grainger plc at their West of Waterlooville Major Development Area (MDA) in Hampshire, Mayer Brown is acting as Travel Plan Coordinator for the residential…

This project was for a proposed supermarket development at Land North of Lavendon Road, Olney Buckinghamshire.

Mayer Brown has been working with Bournemouth Development Company, to create a £150 million mixed-use scheme for the Winter Gardens. Winter Gardens is the largest of its kind in the seaside town’s…

Mayer Brown assisted Stoneham Construction Ltd. by undertaking road and drainage design in a development of 13 houses for rent by Southern Housing Group. The road is not intended for adoption by the…