In November 2020, one of our Senior Transport Planners George Stow began volunteering at a new experimental School Streets scheme near his home in Hove. See the latest blog on how the scheme has worked and the first hand experience gained.

In early November 2020, I became involved in the School Streets scheme set up near my home in Hove, volunteering to assist in closing the street to traffic around the start and end of the school day. The aim of School Streets is to reduce traffic outside schools at the times that there are the most children nearby. This has safety benefits as well as longer-term health benefits due to reduced air pollution, and also provides a safe space outside schools for children and parents to mingle, contributing to a sense of community and of public ownership of the street itself.

My original blog post, School Streets Experience, First Hand, set out how the scheme was implemented and operates.

In this post, I provide a number of updates, including how the scheme has changed since Covid restrictions have relaxed, and the challenges it faces in the future.

How Has the Scheme Changed Since Its Implementation?

At the implementation of School Streets on Somerhill Road, we were required to close both ends of the street to traffic using portable barriers and placing signs along the road. Permanent barriers have now been installed by Brighton & Hove (B&H) Council. This is a huge benefit to the volunteers as we are no longer required to move any equipment, saving both time and effort.

At the north end of the School Street scheme, the road is closed by use of a new metal barrier to which only the volunteers know the padlock combination. At the south end of the scheme, the road has been closed to traffic at all times of day through new bollards and street sign islands. As only one end of the scheme now needs closing, the number of required volunteers has halved, reducing the workload and contributing towards ensuring the scheme’s long-term success. 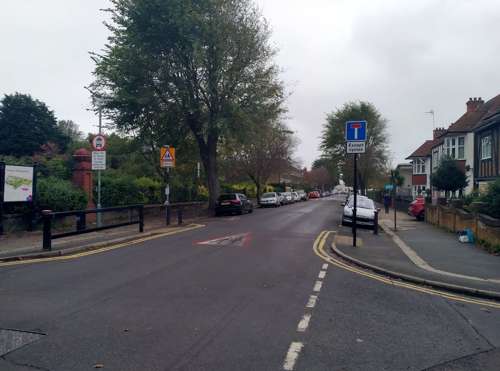 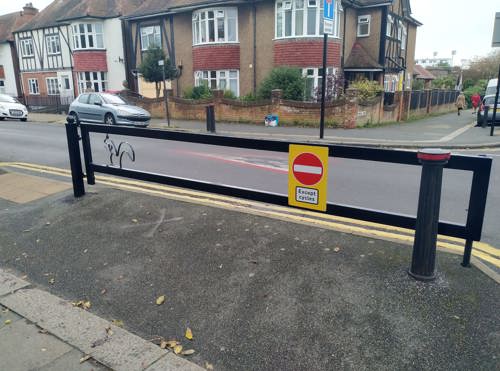 With many Covid restrictions now relaxed, the school has returned to operating at a single start and end time for all year groups, as opposed to the staggered times that were used during the height of the pandemic. With the staggered times removed, there is now a very pronounced peak time in the middle of the closure times when parents and children descend upon the street, with the start and end of the closure times being much quieter.

There is also a clear difference in the number of drivers confused by the scheme. Even the small number of more hostile drivers we encountered at the start of the scheme, have mellowed and accepted the scheme as part of the local area. Most drivers who come into the ‘closed’ area during the School Streets times are aware of the closure and will approach slowly and with their hazard lights on. Indeed, the drivers who regularly access the road during closure times (e.g. blue badge holders accessing the school, deliveries to the retirement home, local residents) are typically recognised by the volunteers, and the gate can be opened for them swiftly, reducing driver irritation and contributing to a more closely knit community.

Unfortunately, it is also noticeable that there has been a drop in the number of volunteers available for the scheme. It is suspected this is because during Covid, many people were working from home or on furlough, and therefore had more time free in their local community during the day to volunteer. Many volunteers used School Streets as a reason to get out of the house - but with measures relaxed, this is not quite as appealing as it once was. This has fortunately coincided with the closure of the southern end of the street to all vehicle traffic, reducing the number of people required to maintain the scheme. 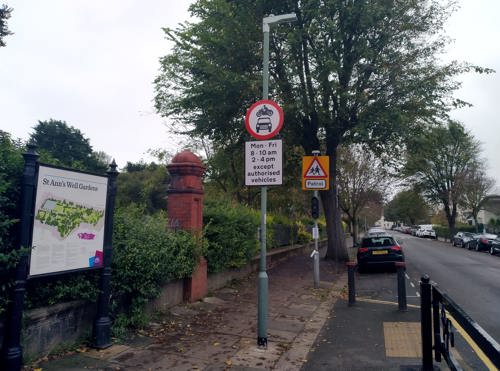 In September 2020, fourteen schools across B&H were chosen to take part in School Streets. While the scheme has been a success at a number of these schools, and three have since benefitted from the introduction of permanent infrastructure, many also have not survived through to the current date - either due to a lack of involvement from the school administration, a lack of volunteers, or in some cases local opposition.

During Covid, emergency powers were granted to local authorities to make Experimental Traffic Regulation Orders (ETROs) without the typical public consultation. While in some cases (such as the School Streets on my road) the scheme has been successful notwithstanding, in many areas local residents were understandably hostile to overnight changes that came forward without any consultation.

However, with the experience B&H have now gained from the successful schemes, and the information gathered about the benefits, it is expected that there will be some positive outcomes from public consultation for these six new potential School Streets schemes.

What Challenges Lay Ahead for the School Streets Scheme?

Were everything to remain as-is at the School Streets on Somerhill Road, I suspect it would be a long-term success, with the only concern being to ensure there are sufficient committed volunteers. The current cohort can be expected to move on in a few years as people move out of the area, or as their child moves up to secondary school. The scheme is also vitally dependent on the coordination efforts of Alberto Zanni, who operates the rota, updates volunteers, and ensures that all shifts are staffed. However, in future that role may fall onto someone else, and unless the school or the council take on the job directly, there will be very large shoes to fill for any new cohort of volunteers.

More imminently, B&H have recently reviewed all of the street scene changes that they made under the ETRO emergency Covid powers. Most notoriously, this included the Old Shoreham Road bicycle lane, which has now been removed. Also included in this review was the closure of the south end of Somerhill Road to vehicle traffic, and B&H have now resolved to remove the bollards and signage due to concerns about large vehicles (specifically refuse lorries) using the retirement home access to turn around at the closed end of the street.

Locally there is opposition to these bollards being removed - just as they were put in without any consultation, they are now being removed without any consultation. Many residents appreciate that the road no longer acts as a through-route, as the reduced traffic throughout the day contributes to a more pleasant street scene, encouraging walking and cycling. A petition to retain the road closure is currently live and has amassed hundreds of signatures. For School Streets, there is a concern that removing the bollards could jeopardise the future of the scheme, as it will require twice as many volunteers, and will once again require volunteers to bring up the temporary barriers for each School Streets closure. Given the reduction in volunteers since Covid restrictions have relaxed, this change could have serious ramifications for the scheme.

While it is clear this is not the end of the Somerhill Road School Streets scheme, this story highlights the importance of good public consultation when making changes to the local streets. For School Streets to survive long-term, it requires the backing of the local authority, the school, local residents, and parents, as well as any other affected parties, and this is not always a given.

If you are interested in finding out more about the School Streets scheme, I can be contacted at 01483 745441 or gstow@mayerbrown.co.uk.

You can also find out further information on the School Streets scheme in our blog post, Banning Traffic Outside Schools.